So, put down your chocolate éclair or whatever you’re eating on whatever break your taking to read this. (Thanks for doing that, by the way.) I don’t mean to guilt you out of it, that scrumptious snack, but you’re probably just not gonna feel much like eating it by the end.

An old friend of mine, Shekinah Pugh, is doing this World Food Program five-day challenge called Live Below the Line. You subsist on $1.50 a day, which is the US equivalent of the worldwide “extreme poverty line.” People sponsor you to stretch yourself thin to raise money for, as the Web site says, “some of the best U.S. charities that fight extreme poverty around the world.”

One in four kids is stunted due to hunger. It’s the world’s largest solvable problem.

Shekinah’s eating a hardboiled egg for breakfast and some reheated frozen broccoli for lunch and some white rice for dinner. In addition to the paucity of food $1.50 gets you, Shekinah’s also realizing what poor quality food it gets you, too, because decent food costs a lot of money, which is one of the myriad reasons why poverty = poor health. She did her grocery shopping for the week at the 99-Cent Store, which as you can imagine a) a whole lot of people have to do, and b) means she doesn’t have the world’s freshest ingredients.

I know it’s totes #firstworldproblems to not be able to shop the organic kale section at Whole Foods for a week, but it highlights just one of the innumerably shitty things about living in poverty. Whether undernourished or obese – both of which go hand-in-glove with poverty – you’re low on energy, your brain ain’t workin so you get behind in school or fired from your job, you’re feeling horrible, depressed, even suicidal – your entire life can be ruined by malnutrition.

Says Shekinah, after only a few days on this little food: “Never before in my life have I felt the pains of hunger the way I experienced this evening. Never before have I been brought to tears as I felt my stomach cramp and turn inside out. My emotions have hit a wall today. I’ve been crabby, tired, sensitive, sad, angry…. A roller coaster. Irrational.” Those of you looking for a literary meditation on just how insane hunger can make you should check out Knut Hamsun‘s Hunger, a Dostoyevskian investigation of the lengths of self-denial and self-destruction to which a man’s pride will drive him. The protagonist is an unnamed wannabe author who’s roaming the streets of Kristiania hoping to be recognized for the genius writer he thinks he is, sure to strike it rich if an editor would just read the latest and best essay he’s figuring to prepare, just as soon as he can get a full stomach, or at least enough for his brain to work a little. His pride keeps him from begging and his delusions from stealing, and the narrative gets weirder and weirder as he descends further and further into starvation insanity:

I was fading helplessly away with open eyes, staring straight at the ceiling. Finally I stuck my forefinger in my mouth and took to sucking on it. Something began stirring in my brain, some thought in there scrabbling to get out, a stark-staring mad idea: What if I get a bite? And without a moment’s hesitation I squeezed my eyes shut and clenched my teeth together.
I jumped up. I was finally awake. A little blood trickled from my finger, and I licked it off as it came. It didn’t hurt, the wound was nothing really, but I was at once brought back to my sense. I shook my head, went over to the window and found a rag for the wound. While I was fiddling with this, my eyes filled with water — I wept softly to myself. The skinny lacerated finger looked so sad. God in heaven, to what extremity I had come!

If you like heavy, if you like disturbing, if you like moving and incredibly good writing, you should pick it up. If you need a pedigree-type reason, Hamsun won the 1920 Nobel Prize in Literature, and helped usher modernism into Norwegian literature. Paul Auster said about the book, “you can tell something new is happening here.” He’s kind of a big deal. 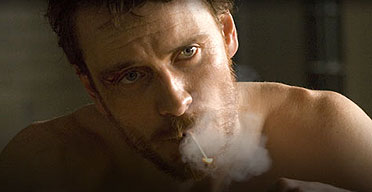 If your tastes run more towards the cinematic, there’s always Hunger the film, by Steve McQueen (the Brit, not the biker) with Michael Fassbender, based on the 1981 Irish prison hunger strike. Besides the mind-blowing twenty-minute dialogue (shot in one take!) between Fassbender, who plays strike leader Bobby Sands, and Liam Cunningham, who plays his priest, the film’s also impressive for its gritty display of what hunger does to people. Fassbender lost what looks like about 93% of his total body weight for the last-days portions of the film, and the makeup artists did an incredible job mocking up the sores and skin-cracks and other horrible things that happen to a body wasting away from lack of food. The political history stuff is interesting – it’s why I picked it up – but by the time Fassbender’s convinced you of the reasons he’s pursuing this hunger strike (it has as much to do with his personal grit than anything about The Troubles), politics takes a backseat, and you’re watching this man just shrivel up but you’re pulling for him in his revolting and pathetic attempt to maintain his dignity, despite the fact that it’s killing him. It shows better than anything I’ve seen or read a) just how horrid and unfeeling The Machine is and b) just how powerful the will of men can be.

It’s because of Hunger, but even more because of Hunger, probably, that I’ve had such a strong reaction to the hunger strikes going on at Guantánamo Bay. In case you don’t know, some of the 166 prisoners down in Cuba – about half of whom have been cleared for release yet continue to languish – have gone on hunger strike. The latest discussion – dealt with well in this NY Times article – is whether prisoners have the “right” to starve themselves to death in our prisons, or whether our military has the “right” (they call it “responsibility”) to keep them from starving. Doctor Jeremy Lazarus of the AMA says that, “Every competent patient has the right to refuse medical intervention, including life-sustaining interventions.”

That might be true for American ethicists, but Gitmo supervisors, I’m guessing, aren’t too concerned about the finer philosophical points the Tweed Coats are debating. They’re probably more worried it looks pretty. fucking. bad. when your prisoners start killing themselves to protest their imprisonment. NYT’s changed the article since Tuesday to include Obama’s assurance that “I don’t want these people to die,” and his belief that Gitmo is a “recruiting tool for extremists,” so I can’t get you the exact quotes by the Gitmo staff that I’d wanted to, but basically they were saying that they added more staff to help do this “enteral” feeding, and that as guards, it’s their duty to keep prisoners alive so that, ostensibly, they can go through the justice process.

Perhaps, as it may fall out, to be put to death.

What that means is that the US is trying to maintain a level of control over their prisoners’ lives to goes far deeper than what we normally think of when we think prison-as-controlled-environment.

“I do not want to kill myself,” one of the Gitmo detainees is quoted as saying. “My religion prohibits suicide. But I will not eat or drink until I die, if necessary, to protest the injustice of this place.”

Albert Camus wrote that suicide is the “one truly serious philosophical question.” Everything else outside of that is secondary. In “The Myth of Sisyphus,” Camus is referring mostly to the reactive, seemingly inexplicable act: “An act like this is prepared within the silence of the heart, as is a great work of art. The man himself is ignorant of it. One evening he pulls the trigger or jumps.”

Death-by-hunger-strike is different in that it very much is a planned event. It takes place over a long period of time. Its practitioners are far from “ignorant of it.” But it very much gets to the core of Camus’s project in “Sisyphus” – the meaning of life. Camus argues that just because life is absurd does not mean the actions we take within it do not have meaning. In fact, life’s absurdity endows our every single action with meaning – that’s existentialism’s whole project.

And it’s this notion – of self-determination, of rights and responsibilities – that is at the core of this force-feeding debate at Guantánamo. These people have nothing – nothing – with which to assert their humanity except by starving themselves, by putting themselves through the most drawn-out, agonizing death imaginable.

Sieges on cities worked because starving people breaks their spirits. Warlords and mafias control entire areas by controlling food – some would say dictators control entire countries or populaces that way. World hunger is a solvable problem – that’s what Shekinah is raising awareness about and money for.

And we, the Superabundant, are controlling people’s continued existence by force-feeding them. Brutal fucking irony, that, no?

What do you think?

Are we robbing these people of their humanity?

Or am I missing something?

Should you be allowed to starve to death?

How different is that from euthanasia?

Is is the context that makes it different?

What is the context in which it’d be okay?

Header image: Caravaggio’s Boy With A Basket Of Fruit